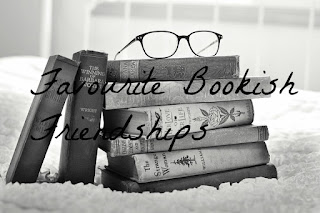 This is not a normal relationship. At all. Kady is human, whereas AIDAN is an artificial intelligence. The weird sort of friendship that developed between those two is one of my favourites of all time. It was heartbreaking, funny but so satisfying to read about.

Another weird friendship, although they're both human, Gemma has been kidnapped and has been taken to the Australian outback. Her kidnapper is Ty. This was such a weird story to read about, because I felt sympathy for both of these characters and the relationship they developed together. It obviously wasn't free will on Gemma's part, but I still think she really warmed up to him and so did I. I honestly feel like he's just messed up, but not a bad person.

This book may have been badly edited, the story is one I'll never forget. Abbey just moved to Leeds where she meets Lucy at her new high school. Abbey's twin brother has died and she feels like her family has iced her out. That's when she meets Lucy and she finally has a friend, someone who understands her or at least tries to. Lucy introduces Abbey to her friends and a whole new world opens up for her. Even though shitty things happened, I still feel like Lucy had the best intentions and she did care a lot for Abbey and vice versa.

Kelsier took Vin and made her a part of his group when she needed it the most. She didn't trust anyone and was deeply hurt. Kelsier didn't give up on her and kept trying to train her to be the best Mistborn she could be. Vin looked at Kelsier almost as if he was her father figure.

After looking through all of my books, I came to the realization I don't have a lot of favourite bookish friendships. It seems I need to find some books that live up to my standards! Let me know in the comments what some of your favourite friendships are. I'd love to know.
Posted by Charlie Book Fanatic at 11:53 am