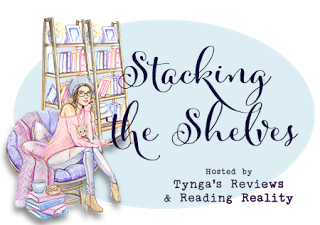 Stacking the Shelves is a weekly meme hosted over at Tynga's Reviews. This meme is all about sharing the books you are adding to your shelves, may it be physical or virtual. This means you can include books you buy in a physical store or online, books you borrow from friends or the library, review books, gifts and of course ebooks.

Since I haven't updated my blog in a really long time, I'll include all of the books I've added to my digital TBR recently. I don't buy a whole lot of books anymore, but I'd still like to share the books that have caught my eye and in turn deserved a spot on my (online) TBR shelf. Don't worry, I'll only mention the books that have already come out so you can go out and buy them yourself as well.

Added to the TBR

Title: The Way of Kings
Author: Brandon Sanderson
Series: The Stormlight Archive #1
Publisher: Tor Books
First publication: 2010
Genre: Epic fantasy
Synopsis: Roshar is a world of stone and storms. One war rages on a ruined landscape called the Shattered Plains. There, Kaladin, who traded his medical apprenticeship for a spear to protect his little brother, has been reduced to slavery. Brightlord Dalinar Kholin commands one of the armies. Across the ocean, an untried young woman named Shallan seeks to train under an eminent scholar and notorious heretic, Dalinar's niece, Jasnah.
Goodreads | Amazon

Title: This is Not a Test
Author: Courtney Summers
Series: This is Not a Test #1
Publisher: St. Martin's Griffin
First publication: 2012
Genre: YA horror
Synopsis: It’s the end of the world. Six students have taken cover in Cortege High but shelter is little comfort when the dead outside won’t stop pounding on the doors. One bite is all it takes to kill a person and bring them back as a monstrous version of their former self. To Sloane Price, that doesn’t sound so bad. Six months ago, her world collapsed and since then, she’s failed to find a reason to keep going. But as the days crawl by, the motivations for survival change in startling ways and soon the group’s fate is determined less and less by what’s happening outside and more and more by the unpredictable and violent bids for life—and death—inside.
Goodreads | Amazon

Title: Girls of Paper and Fire
Author: Natasha Ngan
Series: Girls of Paper and Fire #1
Publisher: Jimmy Patterson Books
First publication: 2018
Genre: YA fantasy
Synopsis: Each year, eight beautiful girls are chosen as Paper Girls to serve the king. It's the highest honor they could hope for...and the most demeaning. This year, there's a ninth. And instead of paper, she's made of fire.
Goodreads | Amazon

Title: Your Robot Dog Will Die
Author: Arin Greenwood
Series: Standalone
Publisher: Soho Teen
First publication: 2018
Genre: YA sci-fi
Synopsis: In the mid-21st century, dogs are all but extinct. An experiment gone awry caused every canine on Earth to become hyperintelligent. When as a species they stopped wagging their tails, hysteria ensued—followed by a program of mass euthanasia. Now the only surviving dogs are relegated to a sanctuary off the coast of Florida: Dog Island. Seventeen-year-old Nano Miller was born and bred on Dog Island, as were her two best friends, Jack and Wolf.
Goodreads | Amazon

Title: Goodbye, Perfect
Author: Sara Barnard
Series: Standalone
Publisher: MacMillan Children's Books
First publication: 2018
Genre: YA contemporary
Synopsis: Eden McKinley knows she can’t count on much in this world, but she can depend on Bonnie, her solid, steady, straight-A best friend. So it’s a bit of a surprise when Bonnie runs away with a guy Eden knows nothing about five days before the start of their GCSEs. Sworn to secrecy and bound by loyalty, only Eden knows Bonnie’s location, and that’s the way it has to stay. As the days pass and things begin to unravel, Eden is forced to question everything she thought she knew about the world, her best friend and herself.
Goodreads | Amazon

Title: King of Scars
Author: Leigh Bardugo
Series: Nikolai Duology #1
Publisher: Orion Children's Books
First publication: 2019
Genre: YA fantasy
Synopsis: Nikolai Lantsov has always had a gift for the impossible. No one knows what he endured in his country's bloody civil war - and he intends to keep it that way. Now, as enemies gather at his weakened borders, the young king must find a way to refill Ravka's coffers, forge new alliances, and stop a rising threat to the once-great Grisha Army. Yet with every day a dark magic within him grows stronger, threatening to destroy all he has built.
Goodreads | Amazon

Title: Dark Triumph
Author: Robin LaFevers
Series: His Fair Assassin #2
Publisher: Houghton Mifflin Books for Children
First publication: 2013
Genre: YA fantasy
Synopsis: The convent has returned Sybella to a life that nearly drove her mad. Her father's rage and brutality are terrifying, and her brother's love is equally monstrous. When she discovers an unexpected ally imprisoned in the dungeons, will a a daughter of Death find something other than vengeance to live for?
Goodreads | Amazon

Title: Regretting You
Author: Colleen Hoover
Series: Standalone
Publisher: Montlake Romance
First publication: 2019
Genre: Contemporary romance
Synopsis: Morgan Grant and her sixteen-year-old daughter, Clara, would like nothing more than to be nothing alike. Morgan is determined to prevent her daughter from making the same mistakes she did. The only person who can bring peace to the household is Chris—Morgan’s husband, Clara’s father, and the family anchor. But that peace is shattered when Chris is involved in a tragic and questionable accident.
Goodreads | Amazon

Title: Children of Blood and Bone
Author: Tomi Adeyemi
Series: Legacy of Orïsha #1
Publisher: Henry Holt & Company
First publication: 2018
Genre: YA fantasy
Synopsis: Zelie Adebola remembers when the soil of Orisha hummed with magic. Burners ignited flames, Tiders beckoned waves, and Zelie's Reaper mother summoned forth souls. But everything changed the night magic disappeared. Under the orders of a ruthless king, maji were killed, leaving Zelie without a mother and her people without hope. With the help of a rogue princess, Zelie must outwit and outrun the crown prince, who is hell-bent on eradicating magic for good. Yet the greatest danger may be Zelie herself as she struggles to control her powers--and her growing feelings for an enemy.
Goodreads | Amazon

What books did you acquire lately?
Posted by Charlie Book Fanatic at 10:47 pm